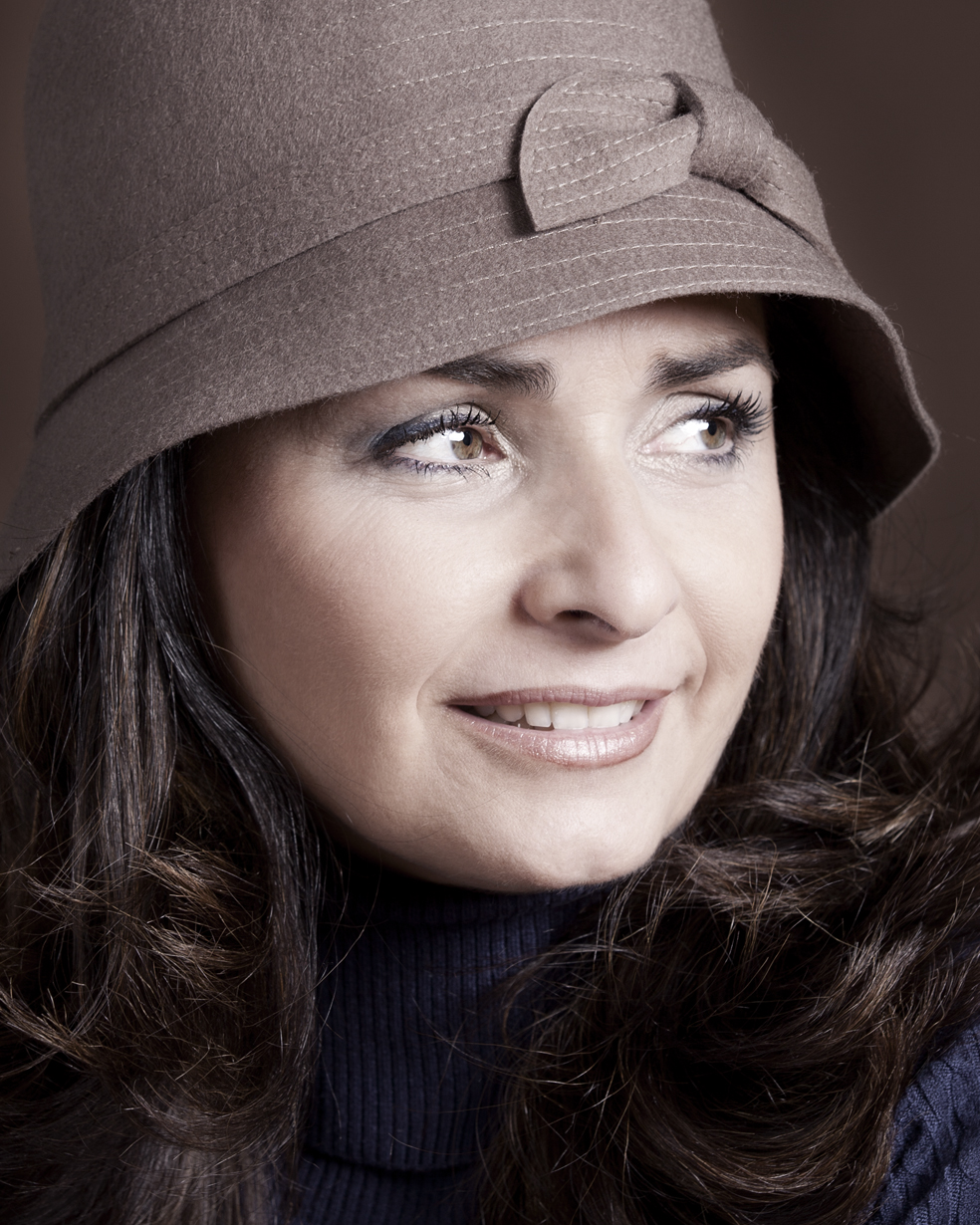 A native of Málaga (Spain), Ana Benavides holds degrees from the Málaga, Granada, Madrid, and Vienna conservatories. Her principal teachers included Gloria Emparán, Manuel Carra, Dianko Illiew and Alicia de Larrocha. She received a Piano Performing Diploma from the Royal College of Music of London and a degree in Spanish Philology from the University of Málaga. She has also received a doctorate in Humanities from the University of Carlos III (Madrid), with the Premio Extraordinario de Doctorado. She was a scholar-in-residence at the University of California, Riverside for the 2014-2015 academic year.

Ana Benavides has performed recitals throughout Europe, Australia, and North and South America and is also a regular visitor to international festivals as both a soloist and chamber musician. She also maintains an active interest in the Spanish piano repertoire of the 19th century and is often invited to give lectures, courses, and concerts on this topic at leading music schools and festivals, including: the Juilliard School of Music, University of Texas, University of Southern California Thornton School of Music, Lancaster International Piano Festival, University of Melbourne, and University of Adelaide, among others. In addition to solo recitals, Ana Benavides performs extensively in a duo with clarinetist Pedro Rubio and also in a classical quintet, Músicos del ayre, playing pianoforte. Ana Benavides served also as the curator for the exposition The Piano in Spain, which was organized by the Joaquín Turina Professional Conservatory of Music in Madrid.

She co-edited (with Walter A. Clark) and contributed to the catalogue of the exhibition El paisaje acústico de Joaquín Rodrigo, organized by the Biblioteca Nacional de España in Madrid for the twentieth anniversary of the composer’s death (May-September 2019). Ana Benavides is currently a Distinguished Professor at the Real Conservatorio Superior de Música de Madrid and Associated Professor at the Universidad Carlos III de Madrid.


Músicas de barro y marfil aims to fill a gap in the studies dedicated to the connection between the popular and academic repertoire. Only knowing the song or dance that beat behind the piano page will its correct understanding and interpretation be feasible. You cannot value a jota de Albéniz if the popular dance is not recognized, with its nuances and constituent elements. The composers of the XIX knew how to recognize and value the popular flow and knew how to connect it with their new contributions. But more importantly, the imprint on the piano left by them is often the only living testimony of an already extinct or modified native expression. If we know how an old seguidilla or a bolero sounds, it is because composers such as Eduardo Ocón or Isaac Albéniz worked hard to transfer these genres to the score, and thanks to them, they are preserved today. 446 pages with more than one hundred images and intended for all types of audiences. 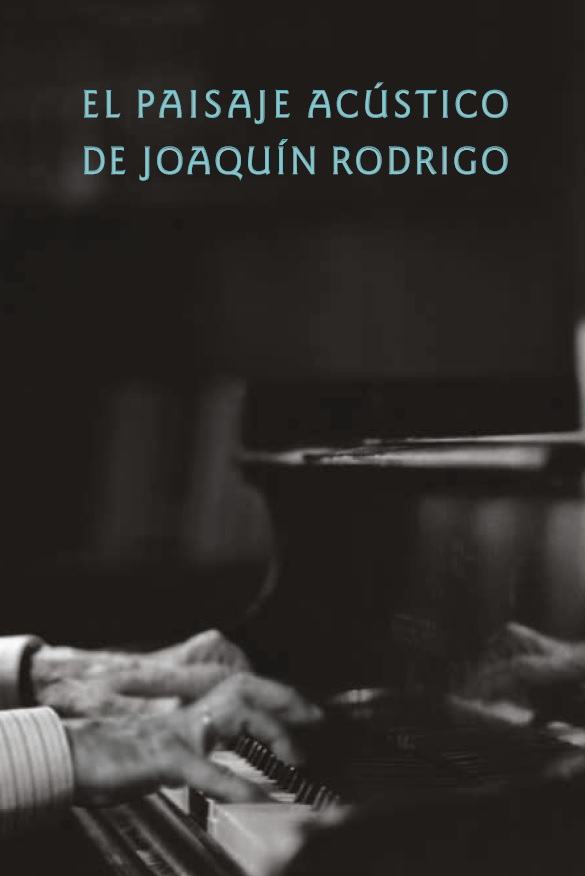 
Catalogue of the exhibition El paisaje acústico de Joaquín Rodrigo, organized by the Biblioteca Nacional de España in Madrid for the twentieth anniversary of the composer’s death (May-September 2019). It is co-edited (with Walter A. Clark). This catalogue includes ‘El piano de Joaquín Rodrigo’ by Ana Benavides.

Joaquín Rodrigo was a composer with an extensive career, with symphonic, theatrical, vocal and solo instruments. If his life did not stick to a pre-established script, neither was his work very different. Rodrigo tasted all kinds of aesthetic bets and there are many different elements that grease the axes of his particular musical cart. He was a great pianist of formation and vocation and therefore it is not surprising that in the Cristofori instrument he turned a large part of his production. 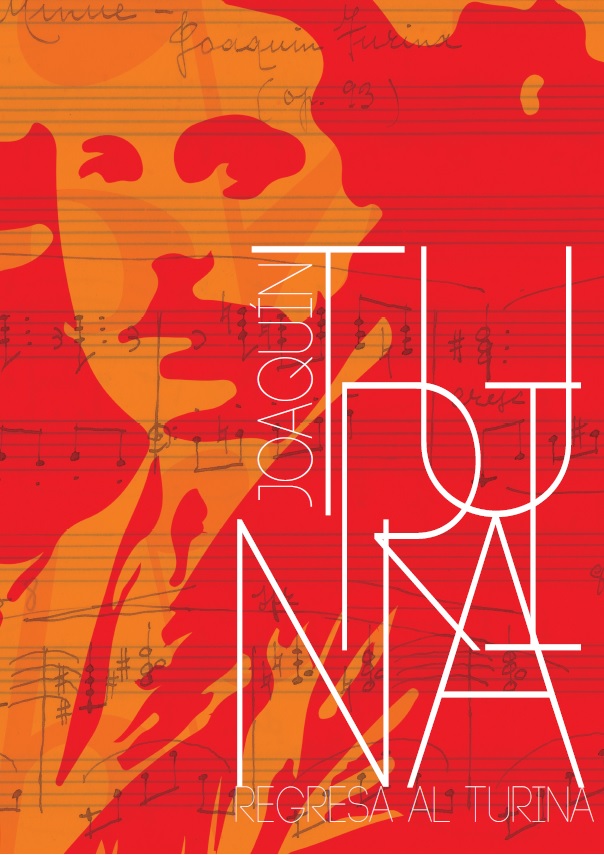 
Catalogue of the exhibition Joaquín Turina regresa al Turina, organized by the Conservatorio Profesional de Música Joaquín Turina de Madrid (2018). Manuscripts, autograph scores, letters, photographs and various writings of the composer or on him leave us the best portrait of the Sevillian musician as a first-hand testimony. The value of friendship, of his religious feeling, or his professional engagement, is reflected through these pages. Through them, we will recognize the artist and the man he was. 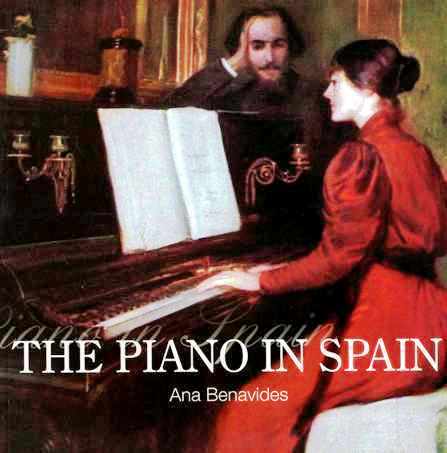 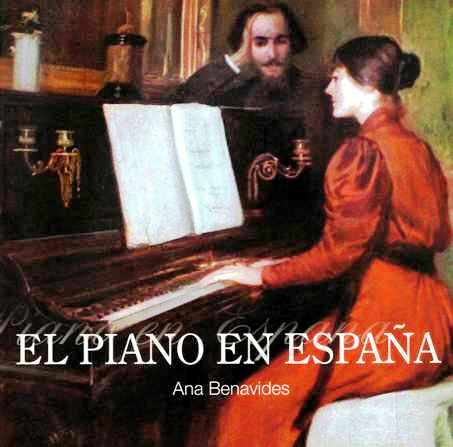 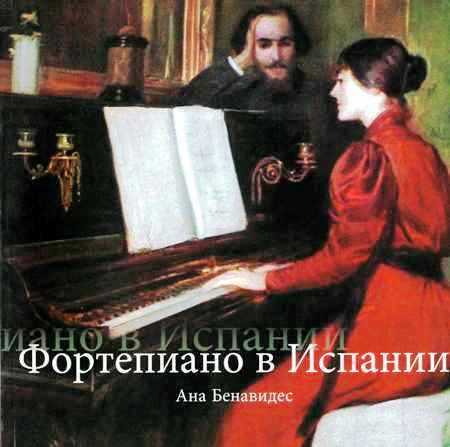 THE PIANO IN SPAIN

(also available in Spanish and Russian)

The main objective of this book is to establish a unifying link between the 18th century and the great nationalists, with an overview of subjects such as the first Spanish piano makers, musical spaces, maestros and predecessors, musical press, etc. Most of the material included has been published for the very first time. This book is an essential tool for understanding the piano in Spain. A new release about the piano in Spain with 147 pages and more than 200 full color images. 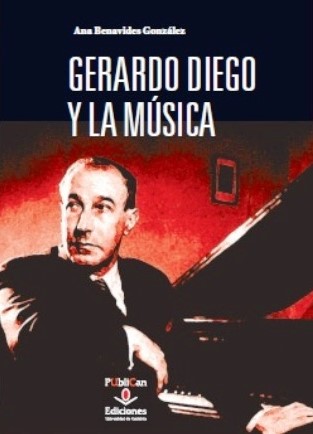 GERARDO DIEGO AND THE MUSIC


Gerardo Diego, major figure of Spanish poetry of the twentieth century was influenced in his poetry for many extra-literary matters, but the music is the one that appears in his writings. Active character in the musical life of Madrid, was one of the pioneers in Spain in playing the complete piano by Manuel de Falla, premiering some of his works and in collaboration with Joaquín Rodrigo and Federico Sopena wrote Diez años de música en España. Friend of the most important musicians of the time, was inspiring and the recipient of many musical works. From his role as a musician was involved in radio and television, and as music critic and columnist his collaborations are around the 900 in El Imparcial, La Libertad, La Tarde, Noticiero Universal, El Escorial, Y, Proel, ABC, etc. 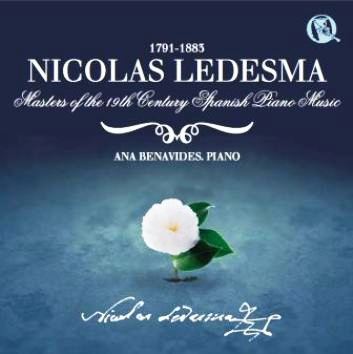 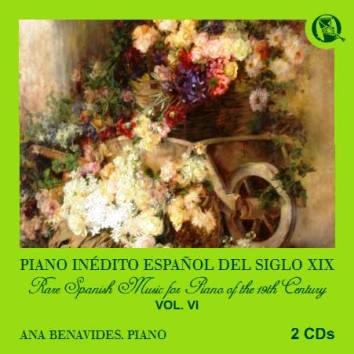 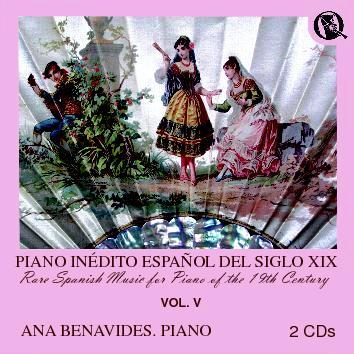 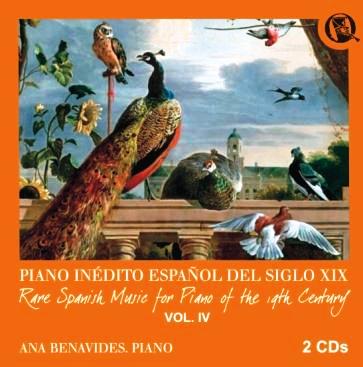 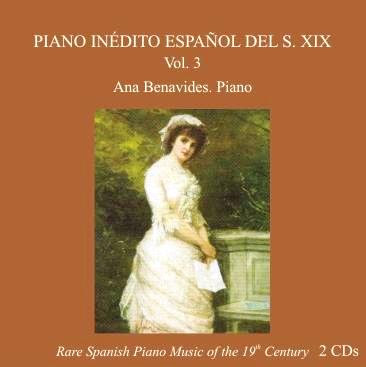 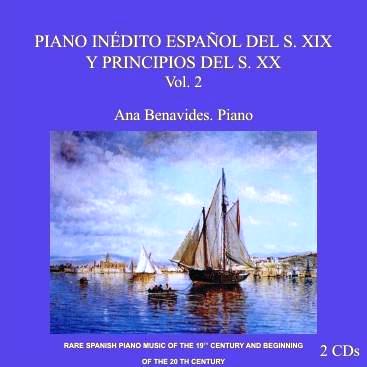 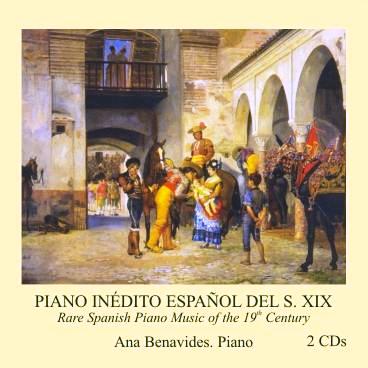 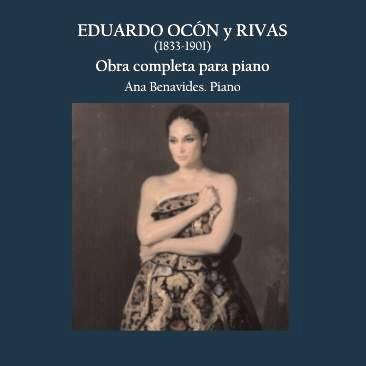 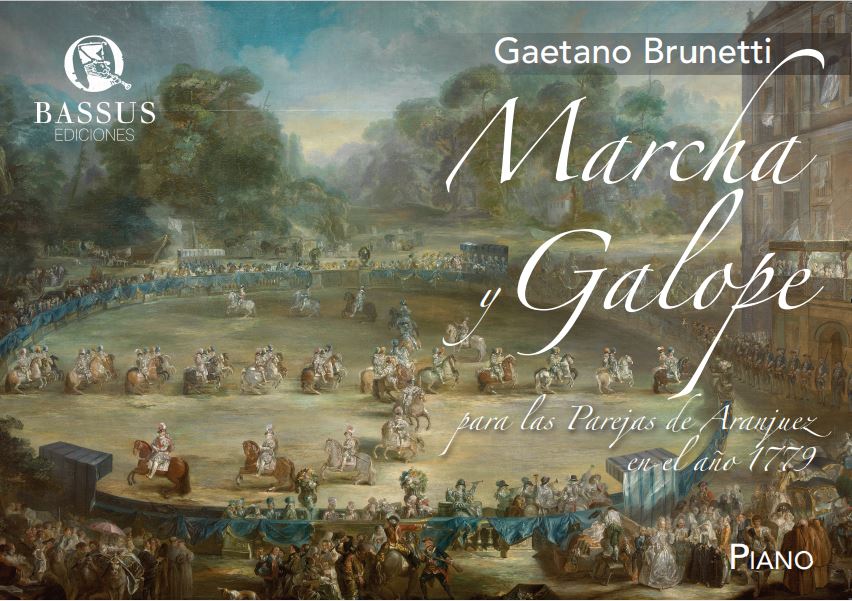 
Violinist and composer Gaetano Brunetti (1744-1798) was one of the most influential personalities in the circle of Carlos IV and in eighteenth-century European music. As director of the Royal Chamber, he directed and supplied music for court celebrations. The marches and gallops for "Las Parejas de Aranjuez" are especially interesting —music intended for the sumptuous equestrian shows for the festivities at the Royal Site. Originally written for a group of wind instruments and timpani, this version has been transcribed for the piano, respecting the original work of 1779, and adapting it to the keyboard of Domenico Scarlatti or Antonio Soler. The idea is to recover a musical heritage of enormous relevance for the enjoyment of professionals and amateurs alike. 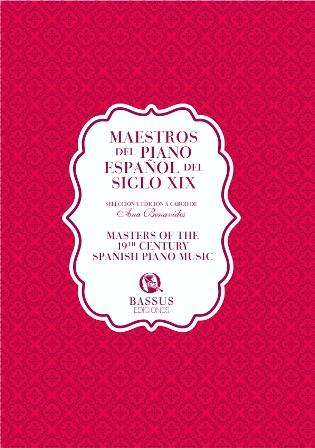 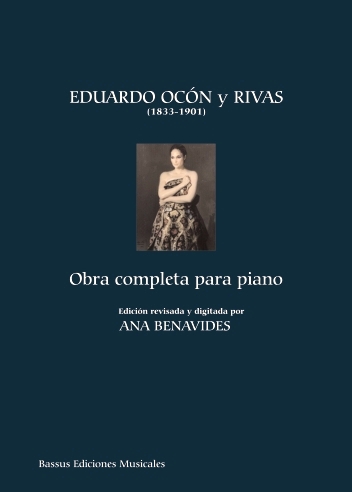 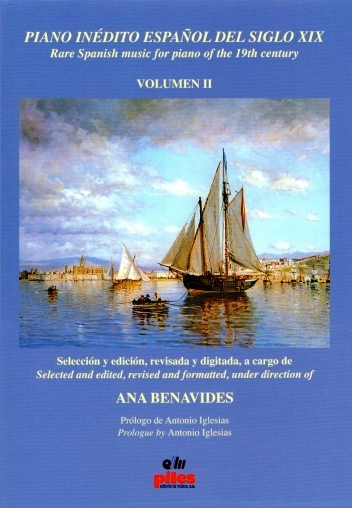 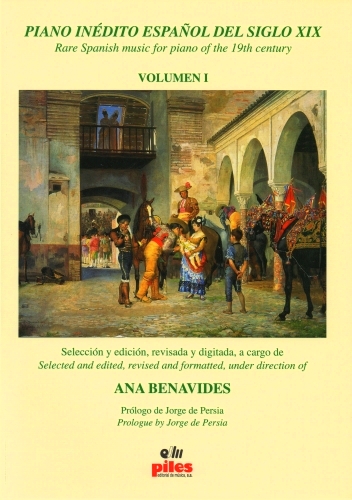 RARE SPANISH PIANO MUSIC OF THE 19th CENTURY. VOL. I

If you wish to contact Ana Benavides, please send an email to: